I can use Condition to check what record should be changed with ChangeResourceRecordSets API call. If I’m not mistaken.

I believe you may be mistaken.

Amazon Route 53 has no service-specific [condition] context keys that can be used in an IAM policy.

Additionally, none of the global condition keys seem applicable.

However, I believe there’s a workaround for this.

Create a second public hosted zone for the domain _acme-challenge.ldap.example.com. I know you’re probably thinking “but that’s not a domain!” but in the relevant sense, it actually is still a domain.

Route 53 will assign 4 new nameservers to this new hosted zone. Make a note of those servers.

Back in your original hosted zone, create a record for _acme-challenge.ldap.example.com of type NS. The value you will use to create this record will be the 4 nameservers that Route 53 assigned to the new hosted zone, one per line. Do not change any of the existing NS records in either of the zones.

This is called a delegation — you’re delegating authority for this particular subdomain to a different hosted zone, which you will notice was automatically assigned a completely different set of 4 Route 53 servers from those that handle your parent domain.

Now, you can give your script permission only to modify records in the new zone, and it will be unable to modify anything in the parent zone, because you gave it no permissions, there.

In the scenario of allowing starting EC2 instances with a script to add/remove record set of a domain programmatically, but limit the access to specific record safely without harming example.com.

And for example, the created zone is ZONEABCD

The goal of created domain will be instance-xxx.delegate.example.com without harming
example.com

Create a record set of NS Type in the hosted zone under your root example.com. 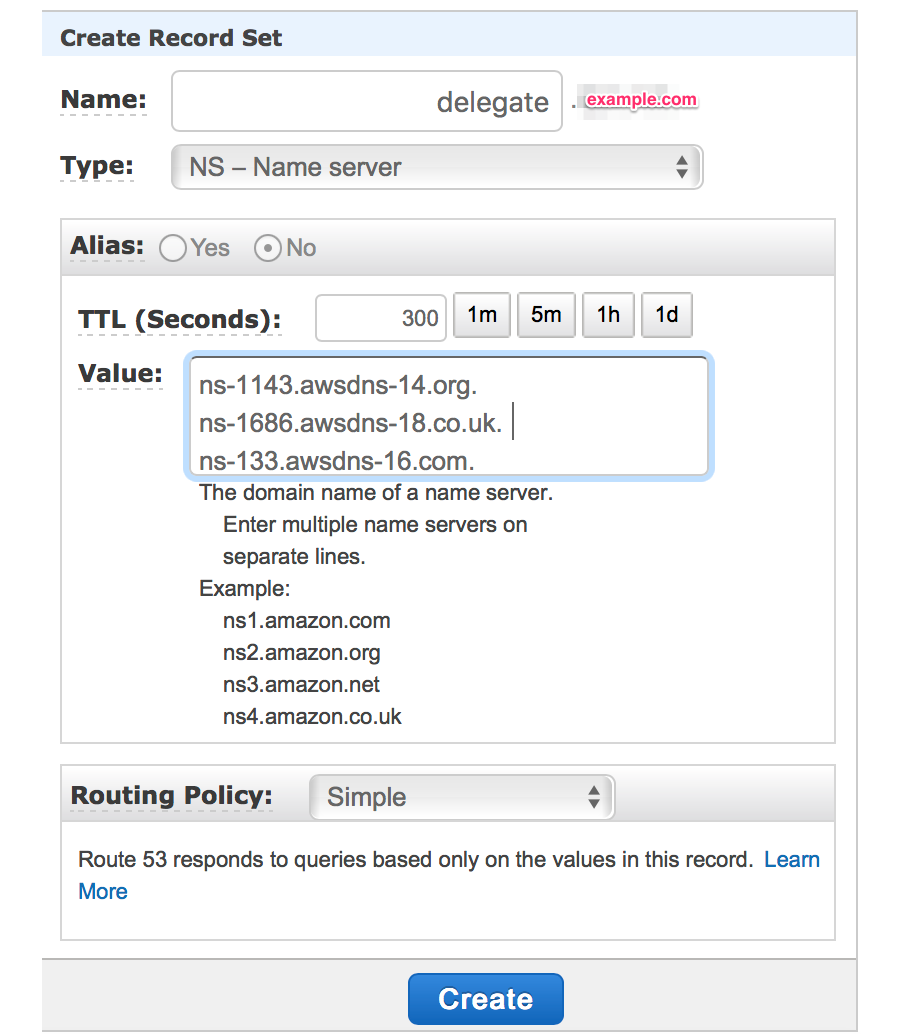 and paste the 4 name servers copied from delegate.example.com.

The you can create a IAM user (copy the accesskey/secretkey for script) with the following policy attached. Limit resource to the created arn:aws:route53:::hostedzone/{ZONEABCD}.